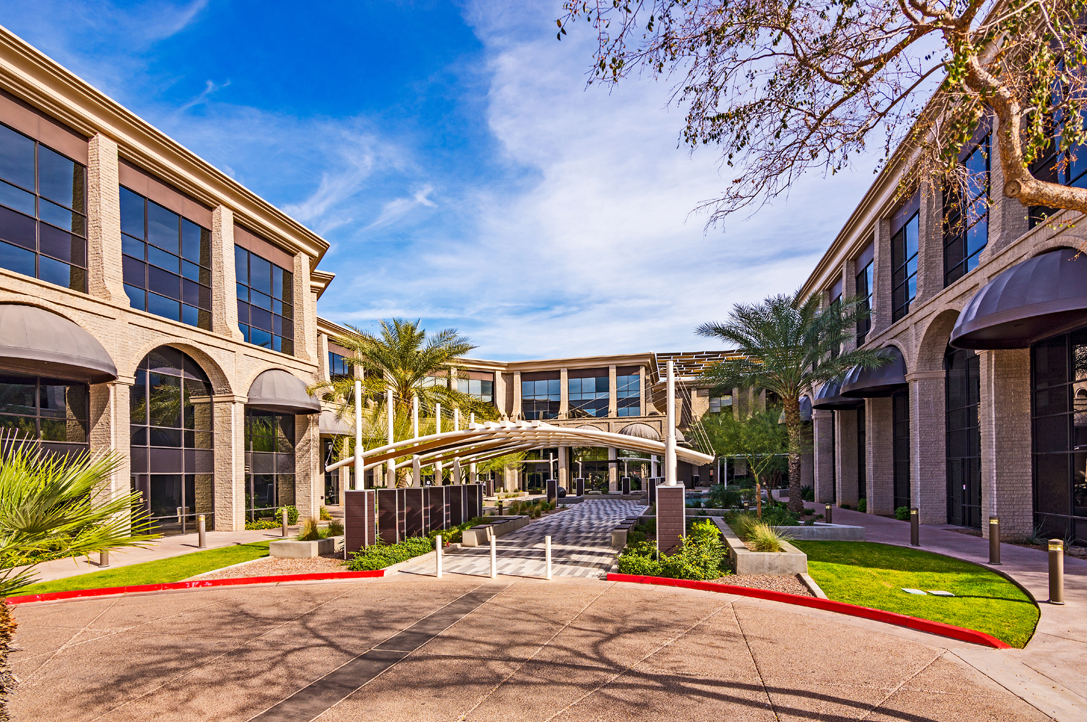 PHOENIX – Just seven months after Bow River Capital Partners in Denver, Colo. (Blair Richardson, Eric Wolf, co-founders) and Fenway Properties in San Diego, Calif. (Larry Jackel, principal) finalized the sale of an office tower on Central Avenue in midtown Phoenix, the two companies completed the trade of another office project located two miles up the road. In the recent deal, a fund managed by Bow River Capital Partners paid $27.95 million ($128.54 per foot) to acquire 217,434 sq. ft. of office space in two buildings located along the east side of 7th Street and just south of Camelback Road in Phoenix. Fenway XV LLC, a company formed by Fenway Properties, was the seller. Steve Lindley, Eric Wichterman, Tracy Cartledge, Bob Buckley and Mike Coover of Cushman & Wakefield in Phoenix negotiated the sale. The office complex, called Valley Commerce Center, is 81.4 percent occupied. Developed in 1984 on 8.2 acres, the project is comprised of four-story structures with 109,735 sq. ft. at 4745 N. 7th Street and 107,699 sq. ft. at 4747 N. 7th Street. Scott Boardman and Dave Carder of Cushman & Wakefield are taking over the leasing assignment. Maricopa County records show RE II Office IV LLC (Bow River Capital Partners entity) acquired the real estate with a $27.35 million loan issued by NXT Capital Investment Advisers LLC in Chicago, Ill. Proving that 13 can be a lucky number, in June 2006 just before the downturn in the economy, BREW reported Fenway Properties paying $22.25 million ($102.33 per foot) to buy Valley Commerce Center. Unlike many real estate investors who unloaded or walked away from Valley real estate due to the market crash, Fenway Properties hung in there for 13 years and was able to sell the office buildings for $5.7 million more than what the company paid to purchase the asset. Bow River Capital Partners, a privately-held alternative asset management firm, has now completed two acquisitions from entities formed by Fenway Properties. In November, BREW reported another Bow River Capital fund paying just over $14.65 million ($51.46 per foot) to buy a 20-story, 284,709-square-foot office tower at 3550 N. Central Avenue in Phoenix. That acquisition included the fee interest in half of the 8.8-acre project, the assumption of a ground lease for the remaining 4.4 acres of the site, a four-story attached annex and zoning approval for the future development of a luxury apartment complex and accompanying parking structure. AEW Capital Management in Boston, Mass. was Fenway Properties’ partner in that development, which is known as Grand Central Tower. Sources say Bow River Capital Partners also have ownership in multi-family and retail properties in the Valley and principals of the company are looking to grow its real estate portfolio in the Phoenix market. Find out more from Garrett Neiffer of Bow River Capital Partners at (303) 861-8466. Call Jackel at (858) 436-3600. Reach the Cushman & Wakefield brokers at (602) 954-9000.