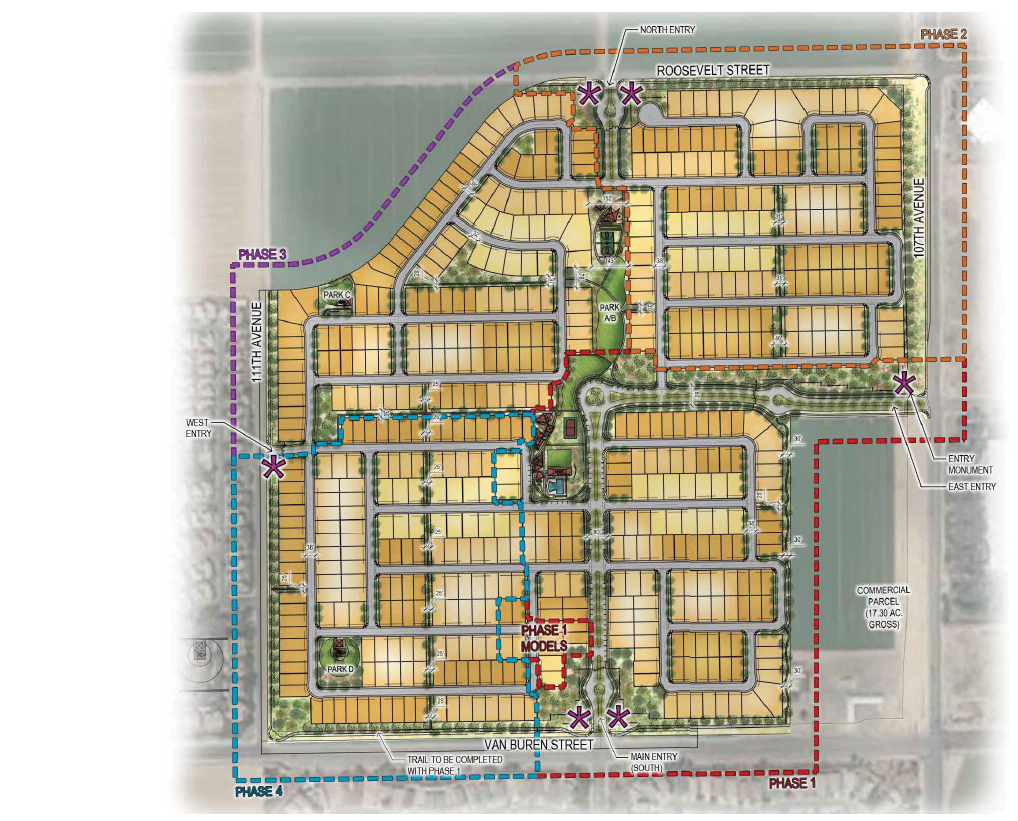 Avondale – After completing the $10.119 million ($79,297 per acre blended average) assemblage of 127.61 acres at the northeast corner of Van Buren Street and 111th Avenue in Avondale and obtaining zoning approval for 607 lots, Mattamy Arizona LLC in Scottsdale (Harry Lourimore, division pres.) is ready to start turning dirt within the planned community called Roosevelt Park. When it's all said and done, the company may end up constructing a dozen fewer homes than the total number of units that have been approved for the master-plan, but it will be Mattamy building all of the residences. Kevin Rust, director of land acquisition and development at Mattamy Arizona, says the company intends to have three lot products with home sites averaging 4,365 sq. ft. (45x97), 4,850 sq. ft. (50x97) and 5,820 sq. ft. (60x97).  The homes sizes are expected to range from 1,540 to 2,870 sq. ft. Ballpark pricing to range from around $200,000 to $310,000. Models within the gated community scheduled to open second quarter 2019. Rust adds that Mattamy is working on new housing designs and elevations for the Avondale project, which will be heavy in amenities and feature multiple lot sizes intermixed in the neighborhoods to create a diverse street scene. In addition to a series of parks that will dot the community, a variety of amenities will include a pool, sport courts with hard surfaces as well as grass, barbeque areas, ramadas, fitness stations, shaded play areas and tot lots. In the second part of a two-property assemblage, Mattamy Arizona LLC paid $4,638,060 ($98,829 per acre) to buy a 46.93-acre parcel at the southwest corner of Roosevelt Street and 107th Avenue. The sellers were four tenant-in-common entities formed by several members of the Anderson family of the Morristown area in northwest Maricopa County (Cynthia Anderson, Stephanie Anderson, Cheryl Anderson, John Anderson, members). Nate Nathan and Courtney Buck of Nathan & Associates Inc. in Scottsdale brokered the cash transaction. In November 2017, BREW reported Mattamy Arizona paying $5.481 million ($75,000 per acre) to buy 73.08 (net) acres in the first part of the Roosevelt Park assemblage. That tract is immediately west of the land purchased from the Andersons. Mattamy Arizona, which is owned by Mattamy Homes in Oakville, Ontario, Canada (Peter Gilgan, principal), has been one of the most active home builders in the Valley. Find out more from Rust at (480) 291-8133. Talk to the Nathan and Buck at (480) 367-0700.