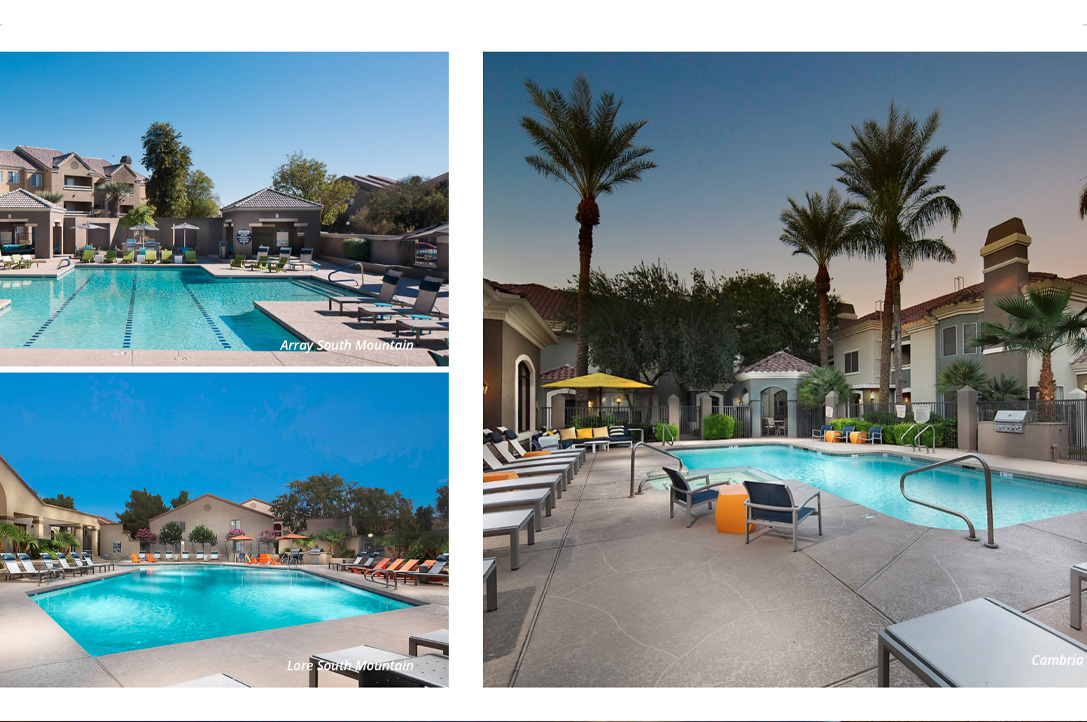 Phoenix/Gilbert – One of the busiest multi-family investors over the past several years has made its first Valley purchase in 2018 by spending $171.25 million ($168,553 per unit blended average) to acquire 1,016 apartments in three projects located in the Phoenix market. A multi-family fund managed by Bridge Investment Group LLC in Sandy, Utah (Robert Morse, chairman) purchased the group of assets in a portfolio deal that included 642 units in two properties in Las Vegas, Nev. The five multi-family communities, comprised of 1,658 units, were acquired by the Utah-based investor for a combined $271 million ($163,450 per unit blended average). Fairfield Residential Inc. in San Diego, Calif. (Greg Pinkalla, chairman), which was the seller of the portfolio, paid $165.4 million ($99,759 per unit blended average) to acquire the assets in 2015 and 2016. Tyler Anderson, Sean Cunningham, Asher Gunter and Matt Pesch of CBRE in Phoenix brokered the portfolio sale to Bridge Investment Group. That privately-held firm, with $12 + billion in assets under management, purchased the apartments through Bridge Multifamily IV Holdings LLC. Maricopa County records show the Phoenix assets were acquired with $54.374 million in cash down payments and $116.876 million in Fannie Mae financing  from a master credit facility agreement funded through Wells Fargo Bank. Here is a summary of the three Valley projects with the buyer name, allocated sale price and property description: BMF IV AZ Array South Mountain LLC (Bridge Multifamily IV entity) paid $98.975 million ($164,958 per unit) to acquire the 600-unit Array South Mountain apartments located in the Ahwatukee area at 13229 S. 48th Street in Phoenix. Fairfield Presidio SM LLC (Fairfield Residential company) was the seller. In July 2015, BREW reported Fairfield Residential paying $57.5 million ($95,833 per unit) to buy the complex (then called Presidio at South Mountain).

Located west of Interstate 10 and north of Ray Road, the 22.38-acre project was developed in phases in 1986 and 1988. Immediately to the north, BMF IV AZ Lore South Mountain LLC (Bridge Multifamily IV entity) paid $37.15 million ($153,512 per unit) to  acquire the 242-unit Lore South Mountain apartments at 13021 S. 48th Street in Phoenix. Fairfield Villas SM LLC was the seller. In July 2015, BREW reported Fairfield Residential paying $23 million ($95,041 per unit) to purchase that community (then called Villas at South Mountain). The 11.75-acre property was built in 1986. BMF IV AZ Cambria LLC (Bridge Multifamily IV entity) paid $35.125 million ($201,868 per unit) to purchase the 174-unit Cambria apartments located at 130 W. Guadalupe Road in Gilbert. Fairfield Cambria LLC (Fairfield Residential company) was the seller. In December 2015, BREW reported Fairfield Residential paying $24.35 million ($139,943 per unit) to buy Cambria apartments. The 8.67-acre complex was developed in 2000. Sources say Bridge Investment Group paid a combined $99.75 million ($155,374 per unit blended average) to acquire 642 multi-family units in Las Vegas apartment communities comprised of the 316-unit Helix and the 326-unit Reflections at the Lakes. Fairfield Residential paid $60.55 million ($94,315 per unit blended average) to purchase those properties in two transactions in 2015 and 2016. Over the past 25 years, BREW has reported Fairfield Residential developing, buying and selling thousands of apartments in the Phoenix area. Although the company was hit hard when the market collapsed and real estate values in the Valley plummeted, the San Diego-based firm stayed the course and has been able to salvage decent returns on some properties acquired or developed at the peak of the market and has faired real well by re-investing in the Phoenix market after the correction. The same goes for Bridge Investment Group and its predecessors, which have been in and out of the Arizona real estate market over the past few decades. The privately-held company, also an investor in the Tucson area, has been buying and selling apartments and office projects primarily in Metropolitan Phoenix. Bridge Investment Group completed many of those deals through an investment vehicle known as the ROC Funds. According to a recent entry from Bridge Investment Group on Linkedin, the registered investment advisor’s 12 + billion in assets is comprised of 31,000 multi-family units, 9,200 + senior housing units and 9.3 million sq. ft. of commercial office buildings. Find out more from Jonathan Slager, co-CEO at Bridge Investment Group, by calling (801) 716-4500. Gino Barra, v.p. at Fairfield Residential, is the contact for the company . . . talk to him at (858) 457-2123. Reach the CBRE agents at (602) 735-5555.