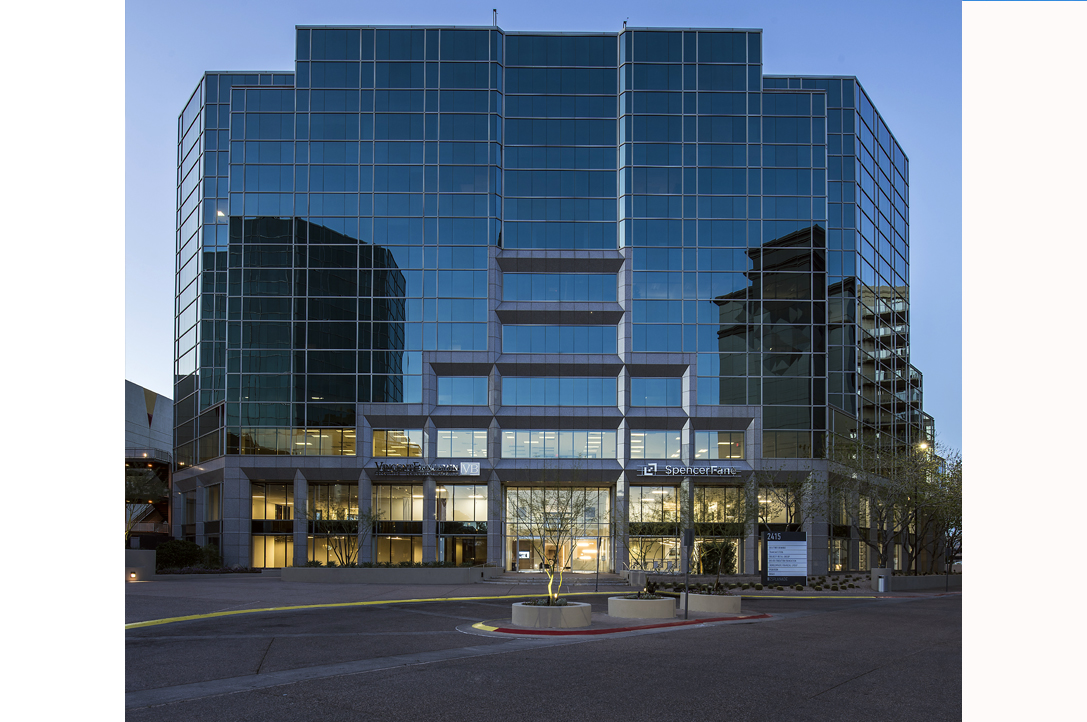 PHOENIX – Camelback Esplanade III, one of five office buildings that comprise the Camelback Esplanade mixed-use project has been sold for $60.25 million ($275.89 per foot) to a joint venture formed by Transwestern in Houston, Tex. (Robert Duncan, chairman) and C-III Capital Partners in Irving, Tex. (Andrew Farkas, chairman). CH Realty VII/O Phoenix Esplanade LLC, a company formed by Crow Holdings Capital Partners LLC in Dallas, Tex., was the seller of the 218,387-square-foot building. Maricopa County records show Esplanade III Owner LLC (Transwestern/C-III Capital Partners) acquired the asset in a cash sale. Barry Gabel, Chris Marchildon and Will Mast of CBRE Capital Markets in Phoenix represented the seller in the deal. Jim Fijan and Jack Fijan of Transwestern in Phoenix represented the buyer. The 10-story structure, located at 2425 E. Camelback Road, is roughly 50 percent occupied. Jim Achen and Bill Zurek of Transwestern in Phoenix will lease and manage the Class A office. With  a block of contiguous space of 100,000 sq. ft. available for lease, Camelback Esplanade III can accommodate the largest office tenant looking to locate in the Camelback Corridor. That was not the case just over four years ago when BREW reported Crow Holdings paying $74.3 million ($340.22 per foot) to purchase what was then a 95 percent occupied building. The empty space is a result of two tenants relocating to other office buildings at Camelback Esplanade. Developed by Opus Corp. in 1997, Camelback Esplanade III sits on just over 1 acre. So now the Transwestern/C-III Capital Partners venture will look to stabilize the asset by securing tenants to occupy the vacant offices. Transwestern, which was able to source the equity partner in C-III Capital Partners, will serve as the operator and manage the investment. “Transwestern is expanding its footprint in the Phoenix market and the west,” says Jim Fijan. “Nationally, the company is partnering with institutional capital on select, high-profile properties.” C-III Capital Partners is a fully-diversified asset management and commercial real estate services company with more than $8 billion of assets under management. Transwestern is a privately-held real estate firm with a family of companies that includes: Transwestern Investment Group, with $4.4 billion of assets under management, and Transwestern Development Co., which develops office, industrial, multi-family, mixed-use and healthcare properties across the U.S. The other four office buildings within the Camelback Esplanade mixed-use project at the southeast corner of Camelback Road and 24th Street are owned by LBA Realty in Irvine, Calif. In December 2015, a limited partnership formed by LBA Realty paid $279 million ($288.69 per foot) to buy 966,421 sq. ft. of space in Esplanade I, Esplanade II, Esplanade IV and Esplanade V. Get more from Katherine Furman of C-III Capital Partners at (212) 705-5084. Carlos Rainwater of Crow Holdings is at (214) 661-8113. Talk to the Transwestern agents at (602) 956-5000. Call the CBRE agents at (602) 735-5555.