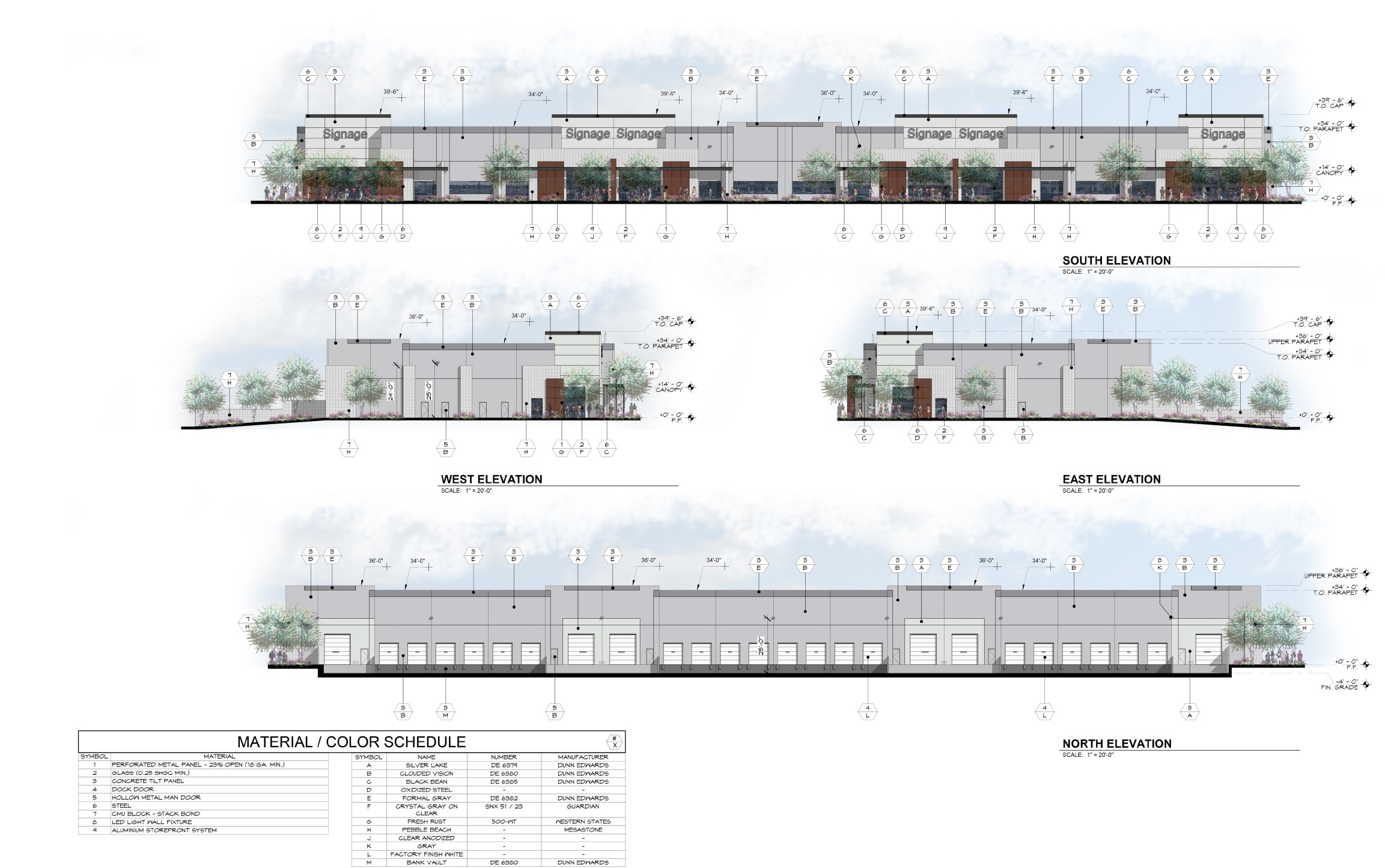 Gilbert – EastGroup Properties L.P. (NYSE:EGP) plans to develop a 319,661-square-foot business park south of the 202 Loop (SanTan Freeway) and west of Lindsay Road in Gilbert. The company paid $6,411,286 ($6 per foot) to buy the 24.6-acre site at the southeast corner of Germann Road and Mustang Drive. RG-Germann LLC, formed by Rockefeller Group Development Corp. in Phoenix, was the seller. Paul Sieczkowski, Rob Martensen and  Phil Breidenbach of Colliers International in Phoenix brokered the cash sale. Butler Design Group Inc. in Phoenix is designing the four-building project called Gilbert Crossroads Business Park. Plans for the first phase show buildings of 57,585 sq. ft. and 82,128 sq. ft. Phase two includes structures totaling 74,948 sq. ft. and 105,000 sq. ft. Mike Sacco, v.p. at EastGroup Properties in Phoenix, says the Gilbert development will cater to last mile distribution, light manufacturing, warehouse and showroom users. Paul Sieczkowski, Martensen and Justin Sieczkowski of Colliers have the leasing assignment and are looking for tenants needing at least 15,000 sq. ft. Construction on the two first phase buildings scheduled to start first quarter 2019, with completion expected fourth quarter 2019. Contractor still to be selected. EastGroup Properties in Ridgeland, Ms. (Marshall Loeb, CEO) is a self-administered real estate investment trust (REIT) that owns 41.3 million sq. ft. of industrial buildings located primarily in Arizona, California, Texas, Florida and North Carolina. Roughly 2.6 million sq. ft. of that space is comprised of six projects in the Phoenix area and the company owns another 1 + million sq. ft. in four Tucson properties. EastGroup has been buying, developing and selling industrial buildings in the Valley for more than two decades. In July, EastGroup completed the $7.941 million ($63.48 per foot) sale of a 125,091-square-foot distribution center at 1601-1605 S. 35th Avenue in Phoenix. BREW reported the company paying $2.785 million ($22.26 per foot) to buy that asset 21 years ago. A fund managed by The Humphreys Co. in Oklahoma City, Okl. acquired the project from EastGroup in a deal brokered by Bo Mills and Mark Detmer of JLL in Phoenix, and Don MacWilliam and Payson MacWilliam of Colliers in Phoenix. Gilbert Crossroads Business Park will be developed by EastGroup Properties on more than half of a 44.72-acre parcel that Rockefeller Group Development paid $13,340,859 to acquire in January 2008. The remainder of that acreage is planned for a 356-unit apartment complex that is being developed by a joint venture formed by LIV Communities in Grand Haven, Mich. and Rockefeller Group Development Corp., which is an affiliate of The Rockefeller Group in New York City, N.Y. Find out more from Sacco at (602) 840-8600, ext. 3. Mark Singerman of Rockefeller Group Development in Phoenix is at (623) 930-5082. Call the Colliers agents at (602) 222-5000.