EXETER ACQUIRING AND DEVELOPING INDUSTRIAL BUILDINGS AT A RAPID CLIP 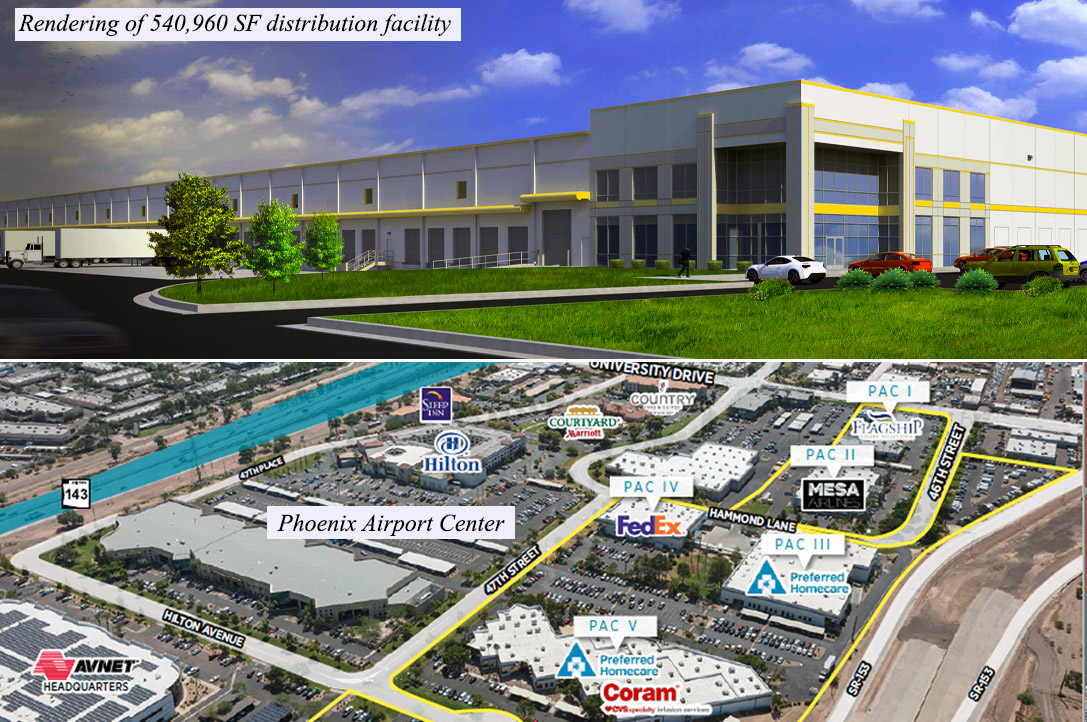 Phoenix – Since entering the Phoenix market in 2013, Exeter Property Group in Conshohocken, Pa. (Ward Fitzgerald, Tim Weber, principals) has established itself as one of the most active commercial real estate investors and developers in the Valley. Including the recent acquisition of a business park and the purchase of a site targeted for a new distribution facility, the privately-held company has now invested $248.3 million ($78 per foot blended average) to acquire roughly 3.182 million sq. ft. of industrial and office space in 14 Valley properties and has plans to develop 900,000 sq. ft. of industrial buildings in two projects located in southwest Phoenix. In what will be its second ground-up development in the Valley, Exeter is building a 540,960-square-foot distribution facility at the southwest corner of 39th Avenue and Lower Buckeye Road in Phoenix. Exeter Property Group paid $7.65 million ($5.25 per foot) to acquire that 33.426-acre site, which is comprised of two parcels located at 3929 and 4065 W. Lower Buckeye Road. The seller was 303 And Lower Buckeye LLC, formed by Scottsdale Investment Management LLC in Scottsdale (Gary Jestadt, Tim Grant, Ed Grant, principals). Stein Koss and Tom Louer of the Koss Louer Team at Lee & Associates in Phoenix negotiated the deal. Maricopa County records show Exeter 39th Land LLC (Exeter Property Group entity) was the buyer in the cash sale. Plans from Cawley Architects in Phoenix show a cross-dock structure with 36-foot clear height. Construction scheduled to start in April 2019, with completion anticipated fourth quarter 2019. Contractor still to be selected. Koss and Louer have the leasing assignment on the project, which will be divisible to 150,000 sq. ft. to 200,000 sq. ft. Development cost (land and building) estimated at $40 million. Construction financing yet to be arranged. Records show Scottsdale Investment Management paid $4,942,471 ($3.39 per foot) to acquire the properties in 2015 and 2016. In another purchase, Exeter Property Group paid $28.6 million ($133.73 per foot) to buy 213,870 sq. ft. of back-office and industrial space in five buildings located within the Phoenix Airport Center business park at the northwest corner of State Route 143 (Hohokam Expressway) and University Drive in Phoenix. LBA Realty Fund II-WBP IV LLC, a company formed by LBA Realty in Irvine, Calif. (Steve Layton, et al., principals), was the seller. Chris Toci and Chad Littell of Cushman & Wakefield in Phoenix brokered the deal, along with Jim Wilson of C&W in Phoenix. Maricopa County records show Exeter 4602 East Hammond LLC (Exeter Property Group entity) acquired the property in a cash transaction. Developed on 17.23 acres of the 85-acre Phoenix Airport Center mixed-use project, the single-story buildings are 90 percent occupied on the average. Phoenix Airport Center I was developed in 1987 and the other four structures (Phoenix Airport Center II, III, IV and V) were all completed in 1980. Here is a description and location of each building: PAC I has 31,877 sq. ft. of back-office space located on 3.59 acres at 4602 E. University Drive that is 73 percent occupied; PAC II has 35,825 sq. ft. of industrial space on 3.09 acres located at 2617 S. 46th Street that is 67 percent occupied; PAC III has 55,102 sq. ft. of industrial-warehouse space on 2.47 acres located at 4602 E. Hammond Drive that is fully leased; PAC IV has 31,178 sq. ft. of industrial and back-office space on 1.94 acres located at 4632 E. Hammond Drive that is fully occupied, and PAC V has 59,888 sq. ft. of back-office space on a 6.14-acre parcel located at 4601 E. Hilton Avenue that is 100 percent leased. In June 1997, BREW reported Bedford Property Investors Inc. (LBA Realty purchased that company in 2006) paying $19 million ($88.84 per foot) to acquire the five-building project at Phoenix Airport Center. Exeter Property Group buys, develops and manages commercial properties across the U.S. and Europe and has managed more than $6 billion of assets for its domestic and international investor partners. In a $28.7 million ($81.14 per foot) purchase completed this summer, Exeter Property Group acquired a 353,711-square-foot flex project located about a mile south of Phoenix Airport Center. That four-building development, called Hohokam 10 Business Center, was sold by the Arizona Department of Transportation (ADOT). A portion of that 21-acre complex located along the north side of Interstate 10 is needed for a planned widening of the freeway. In its first ground-up development in the Valley that is nearing completion, Exeter Property Group is building a 359,040-square-foot industrial building at the southeast corner of Buckeye Road and 83rd Avenue in Phoenix. Christina Virgilio is the contact for Exeter Property Group . . . reach her at (267) 634-3281. Call Jestadt and the Grants at (480) 860-2000. Contact Koss and Louer at (602) 956-7777. Bob Hubbard of LBA Realty is at (602) 648-0905. Talk to the Cushman & Wakefield agents at (602) 954-9000.