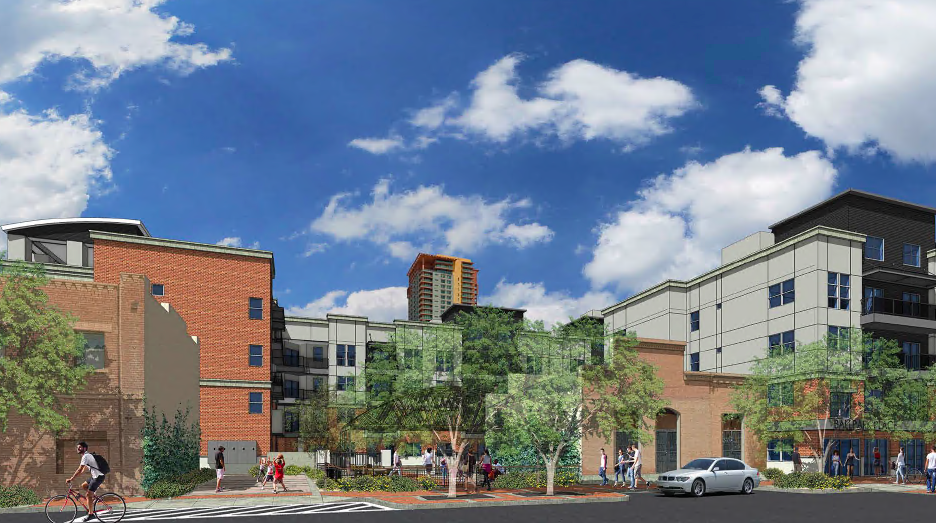 Phoenix – An investment partnership including former Phoenix Suns basketball player Kevin Johnson plans to develop a 278-unit multi-family community adjacent to Chase Field in the Warehouse District of Downtown Phoenix. Being called The Battery, the upscale, urban-theme apartment complex will be developed by JMA Ventures LLC in San Francisco, Calif. (Todd Chapman, CEO). Johnson, affectionately known as “KJ” to Phoenix Suns fans, is part of the investment group that will develop the project. A company formed by JMA Ventures paid $8.4 million ($63 per foot) to acquire the 3.062-acre site, which includes a full block and a half of land located just south and east of Talking Stick Resort Arena where Johnson played his home games (then called America West Arena) for most of his 12-year career. Phoenix Ballpark Residences LLC, formed by Phoenix Ballpark North LLC in Truckee, Calif. (Cyrus Johnson, manager), was the seller. Maricopa County records show Phoenix Battery Lofts LLC (JMA Ventures LLC entity) paid cash to purchase the property, which is located along both sides of  Buchanan Street and between 4th and 3rd streets on the east and west. The Battery will be comprised of two, four-story apartment buildings with 278 units, 4,500 sq. ft. of retail space and a structured parking facility with about 400 stalls. UEB Builders is serving as contractor. Otak Inc. is designing the project, which will feature studio, one- and two-bedroom units ranging from roughly 600 sq. ft. to 1,000 sq. ft. Rental rates still to be determined. Construction slated to start in the next 90 days, with completion expected to take two years. Development cost (land and buildings) estimated at $75 million. No word on equity source or construction financing. A case study from JMA Ventures' website says the company plans to develop the parcel through a GPLET (Government Property Lease Excise Tax) agreement with Phoenix that will provide a 20-year tax abatement. Additionally, The Battery is located in a Qualified Opportunity Zone (QOZ) and benefits from special tax treatment of capital gains from when certain assets are sold and proceeds are invested into a QOZ. Portions of The Battery will be constructed with recycled brick and wooden trusses to blend in with historic structures in the area that were built in the early 1900's. Plans include a rooftop pool and other amenities designed to attract residents looking for a more urban and innovative community. JMA Ventures, a privately-held real estate investment and development company, serves as the managing partner of projects valued at more than $2 billion. The company’s portfolio includes landmark properties spanning hospitality, resort, residential, retail, office and commercial uses. While The Battery will be the first project in the Phoenix market for JMA Ventures, the investment group will be able to rely on connections one of its high-profile partners has in the Valley. After retiring from the NBA 19 years ago, Kevin Johnson returned to his hometown of Sacramento where he served as the City's mayor from 2008 to 2016 and was credited in helping to revitalize that downtown area. Much has changed in Downtown Phoenix since nearly two decades ago when KJ ran the fast break on the hardwood on Jefferson Street. In March, The New York Times published a story headlined "A Renewal for Phoenix's Warehouse District" and cited 110 new businesses that in the past five years have located in south Downtown Phoenix where the majority of the district's 36 warehouses have been declared historic landmarks. In May 2012, the acreage owned by the JMA Ventures entity was sold to Phoenix Ballpark Properties LLC in San Francisco (Harold Robinson, IV, principal) in a $4.75 million ($26.63 per foot) transaction that included 4.095 acres. The additional 1.03-acre parcel (45,000 sq. ft.) is located along the north side of Lincoln Street immediately south of The Battery site. In March 2015, public records show Phoenix Ballpark Properties LLC transferred ownership of the Lincoln Street property to a related company called Phoenix Ballpark South LLC. In May 2016, records show Phoenix Ballpark Properties LLC conveyed ownership in the 3.062 acres to Phoenix Ballpark Residences LLC. While Johnson is listed as the manager of the Phoenix Ballpark North LLC entity that is the manager and sole member of Phoenix Ballpark Residences LLC, Robinson is believed to be the primary principal. Find out more from representatives of JMA Ventures at (415) 728-0794. Talk to Cyrus Johnson at (530) 562-4852.